Stocks hit session lows in final hour, with the Dow down 1,000 points 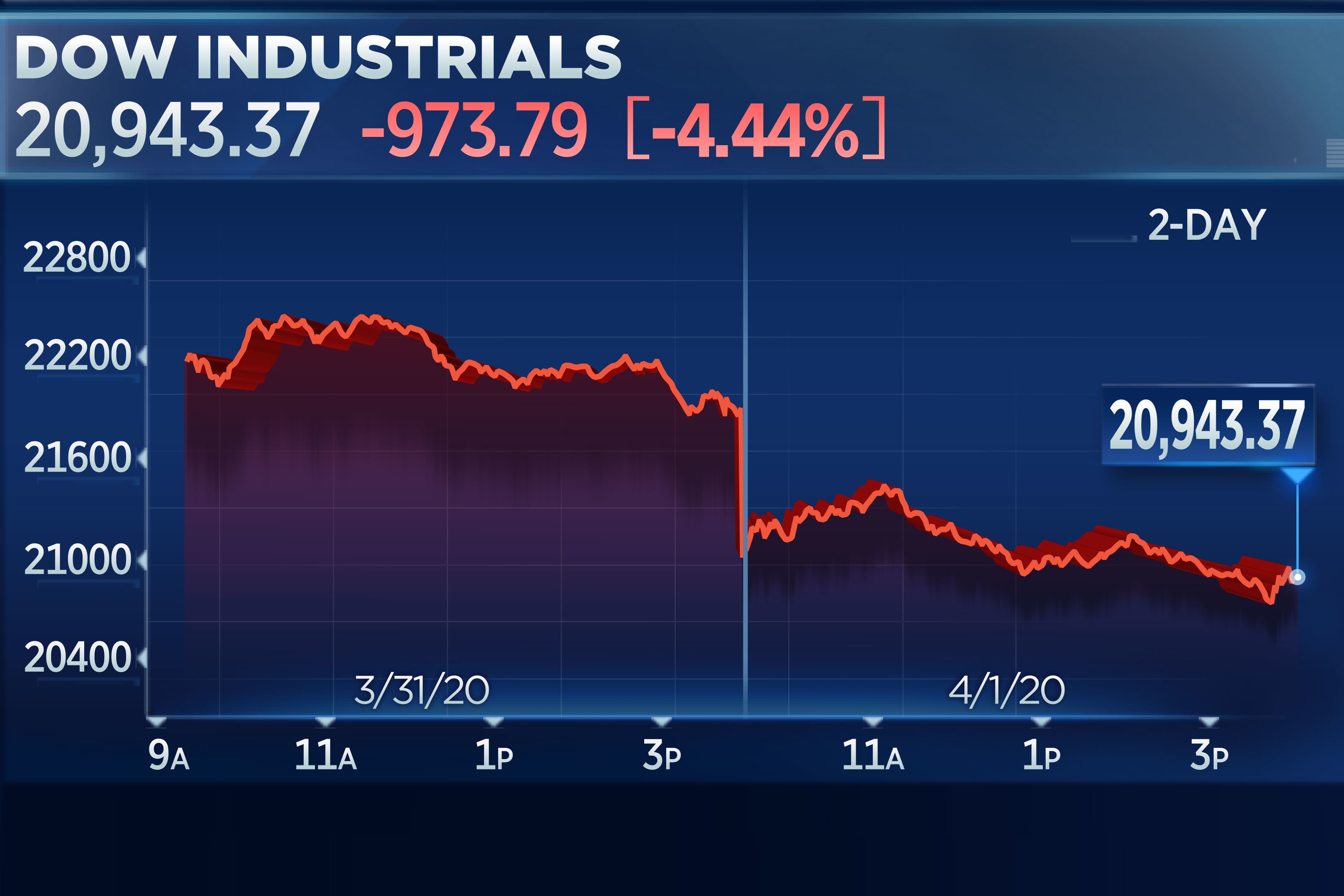 Stocks sank on Wednesday as Wall Street kicked off the second quarter on a sour note thanks to persistent concerns over the spread of the novel coronavirus.

The Dow Jones Industrial Average traded 1,000 points lower, or 4.6%. The S&P 500 slid 4.8% while the Nasdaq Composite lost 4.7%. The major averages hit their session lows with less than one hour left in the trading session.

President Donald Trump said Tuesday evening the U.S. should prepare for a “very, very painful two weeks” from the rampant coronavirus. White House officials are projecting between 100,000 and 240,000 virus deaths in the U.S.

“This is going to be a rough two-week period,” Trump said at a White House press conference. “When you look at night the kind of death that has been caused by this invisible enemy, it’s incredible.”

“There’s still tremendous uncertainty,” said Patrick Kaser, portfolio manager at Brandywine Global. “We can look at history as a guidepost for the market and the economy, but there’s not a perfect scenario.”

“In situations like this, the best thing for long-term investors is to figure out what they want longer term,” he said.

Boeing, American Express and Dow Inc all fell more than 7.5% to lead Dow industrials lower. Real estate investment, utilities, energy and financials led the S&P 500 lower with each of those sectors down at least 5%.

Data from ADP and Moody’s Analytics showed U.S. companies cut 27,000 jobs through March 12. Actual losses for the month were far worse, as shown by the record number of jobless claims in the week or March 20. Meanwhile, ISM manufacturing index fell to 49.1 in March from 50.1 in February, signaling a contraction in U.S. manufacturing activity amid the pandemic.

“The the news flow that we’ve gotten has been pretty extreme,” said Megan Horneman, director of portfolio strategy at Verdence Capital Advisors. “You combine that with the fact that the data coming in has been dreadful … it’s a lot for investors to absorb at this point.”

She noted, however, the market will “navigate to finding a bottom” as the U.S. fiscal stimulus packages kick in. “But calling a bottom isn’t possible.”

“The low we hit in the middle of March … I would bet that low will get taken out,” Gundlach said in an investor webcast on Tuesday. “The market has really made it back to a resistance zone. … Take out the low of march and then we’ll get a more enduring low.”

The coronavirus pandemic has caused a nationwide shutdown of the economy, halting business production and leaving millions of American workers unemployed. The unprecedented societal disruption has caused financial distress and volatility never seen before.

More than 874,000 cases have been confirmed around the world, according to Johns Hopkins University. Of those cases, over 189,000 are in the U.S. Dr. Anthony Fauci, director of the National Institute of Allergy and Infectious Diseases, told CNN that he is starting to see “glimmers” that social distancing is helping to lessen the spread of the coronavirus.

However, the sell-off has provided active managers with some opportunities for more active managers and investors, said John Davi, chief investment officer at Astoria Portfolio Advisors.

“The baby is being thrown out with the bathwater,” said Davi. “This is a time I think for stock picking and thematic investors. I don’t think the S&P 500 will move as much because I think there’s gonna be a lot of winners and losers. That’s why I think this is the time for active management.”