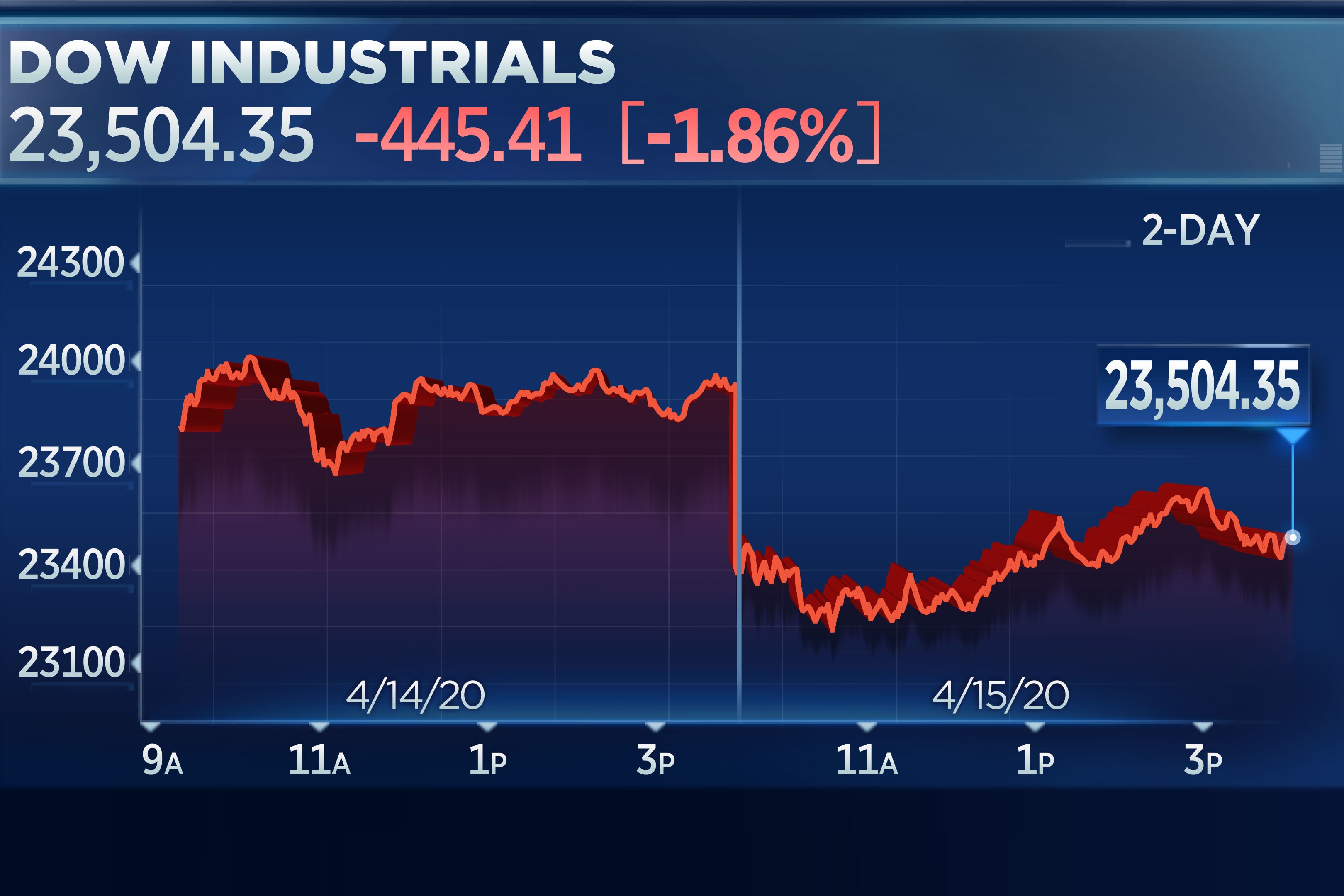 Stocks fell sharply on Wednesday as dismal economic data and weak bank earnings fueled concerns over the coronavirus’s impact on the U.S. economy.

Bank of America closed more than 6% lower on the back of disappointing earnings. Citigroup fell more than 5%. Energy, materials and financials were the worst-performing sectors in the S&P 500, dropping more than 4% each.

Retail sales during the month of March plunged a record 8.7%, according to a report from the Commerce Department published Wednesday. That was the largest one-month decline since the department began tracking the series in 1992.

“If this is a precursor to what we can expect throughout the U.S. … there’s no word for it,” said Quincy Krosby, chief market strategist at Prudential Financial. “The reflects the complete shutdown of the economy.”

“The question is how quickly can the economy come back,” said Krosby, noting the market did gallop higher in recent weeks and was due for some consolidation.

Grocery stores, pharmacies and other retailers of essential goods saw a surge in demand last month amid the outbreak, the government said. But sales at a variety of other businesses — such as gas stations, auto dealerships, and restaurants — swooned as state governments shuttered commerce in an effort to slow the virus.

Manufacturing in the New York area also slumped by its biggest margin ever to a historic low, surpassing the levels seen in the throes of the Great Recession. The Empire State Manufacturing Index hit -78.2, blowing past the prior worst reading the index had seen of -34.3 during the financial crisis.

“This points to a very severe recession because this is just the beginning of a series,” said Peter Cardillo, chief market economist at Spartan Capital Securities. “The consumer’s not spending.”

“What does that mean for the market? I think it means we may have a short-term top here,” Cardillo added.

Banks, among the first major companies to report first-quarter results, gave an early look at the damage the coronavirus downturn is set to do to corporate earnings. The major banks have all reported 40%-plus declines in earnings as they set aside billions to cover what they see as major upcoming losses on loans, credit cards and mortgages.

“Yesterday, the market was still hearing what it wanted to hear, whereas today more like: ‘Here’s what’s actually going on,”‘ said JJ Kinahan, chief market strategist at TD Ameritrade. Kinahan noted, however, the market is trading in narrower ranges than it was when the sell-off first started.

Stocks were coming off a sharp rally in the previous session, sparked by optimism around the coronavirus outlook. The Dow surged more than 500 points on Tuesday, or 2.4%, while the S&P 500 jumped 3.1%.

President Donald Trump said Tuesday that he believes some states will be able to lift the strict social distancing measures that have strained their economies before the end of April.

New York Gov. Andrew Cuomo‘s optimistic tone about the outbreak in his state, the epicenter of the pandemic in the United States, also boosted investor sentiment. He said Tuesday deaths related to the virus in the state are leveling off. On Wednesday, he note hospitalizations related to the virus had ticked down.

“The bending of the virus curve simultaneously across this country and around the globe has brought widespread and serious national conversations about restarting the economy,” Leuthold Group’s chief investment strategist Jim Paulsen told CNBC. “For a crisis whose primary tagline for investors was ‘that is completely unknown,’ this is perhaps the first time there is some semblance of clarity as to a timeline for the end of this sad situation.”